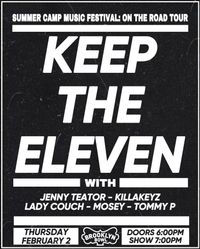 As part of the Summer Camp Music Festival On the Road Tour, Keep the Eleven performs along side Jenny Teator, Killakeyz, Lady Couch, Mosey, and Tommy P at the legendary Brooklyn Bowl in Nashville, TN. Attendees are given 1 ballot vote at the venue to vote for their favorite act to get a spot on the Summer Camp Music Festival in Illinois this summer!

"The band as a whole has a youthful, casual vibe while at the same time clearly taking things seriously and bringing some very entertaining chops to the table." Formed in 2019, Keep the Eleven is a three piece Rock trio from the Chicago suburbs, currently located in Nashville, TN. Commonly described as Garage Rock, but with many influences and not tied down to one category, their music is leading a brand-new resurgence of rock music that speaks to all generations. Keep the Eleven consists of William Laskey (Drums, production), Reece Bittner (Guitars, Vocals), and Adam Caruso (Bass guitar). All songs are written by the band.

Keep the Eleven has performed roughly 70 shows since 2020, including the Belmont University Battle of the Bands to a crowd of over 3,000, the Bitter Jester Music Festival in the Chicagoland that took place at Billy Corgan's popular venue/restaurant Madame Zuzu's,  Drop Tuned Entertainments "Sounds from Underground" Music Festival at the iconic Exit/In in downtown Nashville, and countless packed nights at clubs and venues around the Nashville area, including The End, DRKMTTR, The Cobra Lounge , The East Room, and more.

The band is currently maintaining a consistent gigging schedule in Nashville while working on bringing to life their next project.